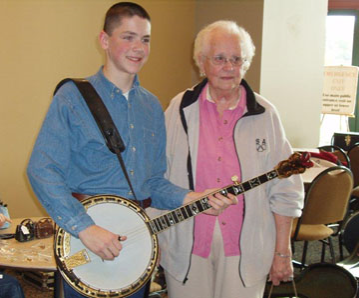 ~This is My Story~

My name is Lucas Worthington and this is the story of how the Lord blessed me with my banjo when I was 13 years old. One afternoon our family was playing music in St.Charles, Missouri. While playing my old banjo I noticed two ladies sitting in the front row watching me play. After a while they got up and left. Later on, when we were finished playing, my dad walked over to me and asked me to follow him. I walked over and saw the same two ladies who had left earlier standing there holding a banjo case. The oldest of the two introduced herself and her daughter. She began to explain that she wanted me to have her son's banjo, because two years before he had died of cancer and right before he died he had asked his mother what was going to happen to his banjo. She said she was either going to keep it forever or give it to someone who really needed it. Apparently she felt that I was that someone. The next thing I knew, I was being handed the banjo case. I opened the case and saw a beautiful Baldwin Ode banjo. Even though it had not been played for some time, the Lord allowed me to tune it (because when I got home the strings snapped!). I was able to play "Shucking the Corn" and "Earl's Breakdown" for Ms. Selma and her daughter Dianne. I will never forget that day as long as I live. You see, I had been praying for a banjo for many months and I never expected God to surprise me like this! So, thank you Ms. Selma for allowing me to have and play your son's banjo. I will treasure it for the rest of my life.

Mrs Selma went on the be with the Lord in 2020. She was a blessing to Lucas and our family and will always be remembered for her loving act of kindness.

Here is a video of Lucas at age 13