Dale and Susan Worthington are the proud parents of 10 children, 9 they were able to raise in the glory of the Lord.

Dale is a wonderful father, husband and person. His unique personality makes him fun to be around! He plays the stand up bass in the band and leads his family daily under the instruction and Grace of the Lord. He enjoys serving the Lord through preaching God's Word wherever the Lord opens up the opportunity, as well as through the family's music ministry. He continues on serving God through this ministry despite the current health obstacles of the Myelodysplastic Syndrome/Myeloproliferative Disease, which affects his red blood cells, which has caused him to have repeated blood transfusions 2-3x each month for years. In October of 2021, he received a Bone Marrow Transplant which we pray will bring him relief from his cancer. The transplant had many risks and will take months of recovery and healing. We ask for your prayers!! We praise God for His Grace and Mercy which continues to get him through each day!

Susan is wife, mother, home educator, band manager, house keeper, errand runner, and graphic artist for all of the family's CD covers, etc. She does her best to keep things organized daily with schedules running smoothly- all while fighting the wolves and pains of Arthritis- which plague her daily. She leans on the Lord for all her strength to get her through each moment of each day. She is an amazing woman!!

Their first son, Christopher, is married and lives in St. Louis, Missouri. He has served in the United States Air Force and is the oldest of the children.

Another son the Lord called home way too early and is safe in the arms of their Lord and Savior, Jesus Christ.

Their oldest daughter, Katarina, is married to Heston Mays from Belle Rive, Illinois. She teaches piano from their home and occasionally you may find them both singing and playing guitar with the family ministry. Heston is an American Family Insurance salesman in Mt. Vernon, Illinois. In 2017, they gave the family their first Grandson!! 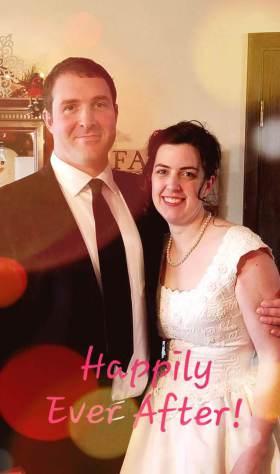 Emily is the family's wonderful fiddle and mandolin player. She sings harmonies and adds a touch of grace to their performances. She and her brothers are wonderful MC's and have a great time ministering through our music by weaving a bit of comedy into their song sets. Chris Talley is her inspiration and Emily gives all credit to the Lord for giving her the ability to play and bringing Chris into her life. She pours her heart into everything she does and everyone who meets her leaves feeling peaceful and blessed! Emily is their level-headed child who helps keep things running smoothly with her natural ability for order and peace. She is truly a blessing to the family! Emily has stopped her AKC Dachshunds business and now focuses on raising her two sweet children. She pours her heart into everything she does!

In January 2019, Emily was married to a wonderful man named Josh Norris, who has been blessed with musical talent and a desire to play with our family band...we pray you will all get to hear him play with us as the months go by! 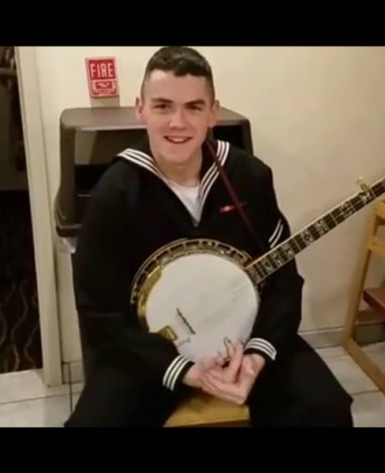 Lucas is our Navy Third Class Petty Officer and US Navy Diver who is also one amazing banjo player! It is awesome watching his fingers fly over the strings in a effortless blur! Earl Scruggs, Don Reno and Bill Keith are some of his inspirations and his parents are so blessed by Lucas' desire to continue his practice and learn all he can where the banjo is concerned, even while serving our country! Back in 2012, 2013 and 2014 he won the Illinois State Junior Banjo Contest making him the three-time Illinois State Junior Banjo Champion! He is also the 2012 Missouri State Banjo Champion! Before he joined the Navy, Lucas played with us regularly, he sang lead with JoyAnn, complimenting her voice beautifully and sang lead vocals in most of our songs. Lucas is also an accomplished piano player. He truly has a gift from God for music. Lucas has an incredible testimony of God's graciousness in his young life that he shares every chance he can get. Check out his "Ode to a Banjo" and read his amazing banjo testimony. In October of 2014, Lucas had the opportunity to meet and play on stage with Roni Stoneman! Such a wonderful treat he got at that young age! Lucas has such a heart for ministry, His testimony on how the Lord is working in his life is awesome to hear!

He joined the United States Navy in October 2016, became AROC in Basic, happily singing the cadences, and graduated Basic as an E3 in December 2016.

In August 2017, he left for his first deployment, finished all his Qualifications in less than 3 months and received his Dolphin pin in Norway. He returned from  deployment, received the Blue Jacket Award for the 2nd Quarter of 2018 for his "go-get-'em" work ethic and is currently stationed state-side, continuing his qualifications in everything he possible can. He had the opportunity to teach banjo and guitar while on board the submarine, as well as hold Bible studies on the submarine each week. In summer 2018, he was Meritoriously Advanced to E4 because of his "can-do-never-stop-determined-spirit." He passed his E5 test in the spring. In September 2019, he began the Navy Seal Diver Program, which he passed with honors.

In the fall of 2020, he left on his second deployment which took him passed the international date line. He is currently state-side and stationed on the east coast. Please pray for him to continue to be used by God and bless others...in every area of his life!!

*In October 2016 Lucas left for Basic Training in the United States Navy. Please keep him in prayer as he serves our country. 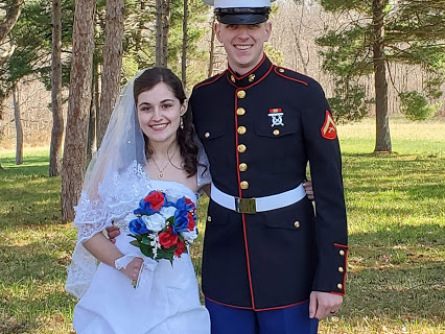 Matthew is the tallest male in the family-at 6' 6" (with boots and cowboy hat)  he plays the acoustic guitar. His witty personality and quirky facial expressions keep the family laughing even during stressful practice times. He is an excellent guitarist and seeing him hone his gift has been a blessing to watch. He plays the piano and does an incredible job. He enjoys being used by God in the ministry. His deep barotone voice adds a wonderful touch to our songs.

Matthew is now serving our country in the United States Marine Corps Reserves. He married his best friend in 2020. Cora is also quite musical and they enjoy jamming togetherand with the family. 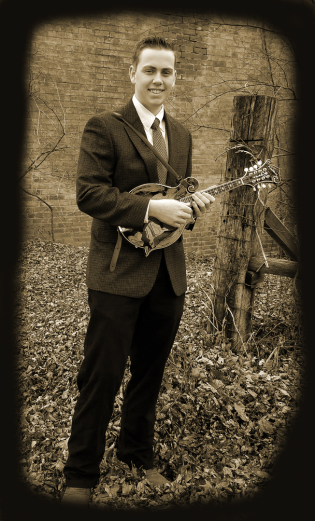 Nathanael is the family's youngest son and plays the fiddle and mandolin and also sings lead and harmony in the band. He is quite talented at playing that mandolin, too!!! His mandolin breaks are awesome to hear! He is just over 6' tall and his sweet, quiet nature and musical ability makes playing together a lot of fun! He has a unique personality that makes watching him play very amusing! He enjoys playing in the family band, playing the piano and practices his music every chance he gets.

Nathanael is now serving our country in the United States Marine Corps and is stationed on the west coast.

*2016-Won 3rd Place in the Open Fiddle at the Murphysboro, Illinois Apple Festival

*2014-Won First Place in the Fiddle Competition at the Perry Biggs Memorial Fiddle Contest in Patoka, Illinois for the Junior Division 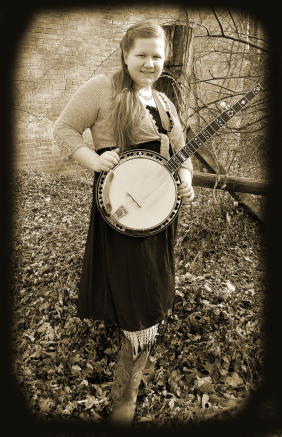 JoyAnn is their effervescent 18 year old! She plays many bluegrass instruments including the guitar, mandolin, fiddle, banjo (her brother, Lucas, is her inspiration!) and many times, the bass. The Lord has blessed her with an amazing singing voice as well! Since she was very little the family knew God would use her voice for His Glory! She is a blessing to the family and always brings "joy" to those who meet her! Joy has become a great song writer, too, writing songs that the Lord gives her. She has a special gift and talent for this. She sings harmonies very well and it will be exciting to see where the Lord takes her with her music. She has begun to emcee many of the music events, as well!

*2013-Won Second Place at the Illinois State Fair's Fiddle and Banjo Competition in Springfield, IL-for Banjo-16 and under 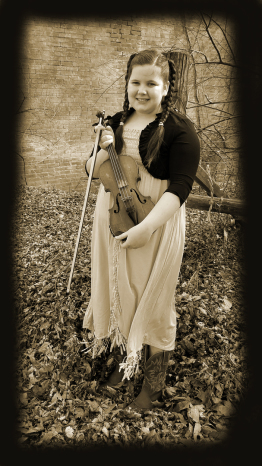 Isabella is their sweet and level-headed fiddle player. At age 15, she plays a version of Swallow-tail Jig that delights all who hears it! She offers a genuine, loving stage presence that is very real and a part of her natural personality. She sings "Unclouded Day" in a snappy, "Gaither-style" which is her inspiration! We all are blessed to have her and her cute-"Bella ways!" 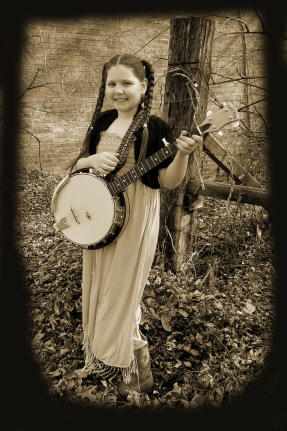 Judith Mercy is 13 and her personality brings smiles to those who watch her perform. She is learning the fiddle and banjo and has an amazing ability to sing on any key that is played. Probably because she has heard music played from the womb! She sings many songs including "Somebody Touched Me" and her version of "Cowboy Sweetheart" with that beautiful yodel is truly a treat to hear! We all look forward to seeing what God does with her in music as the years go by!!